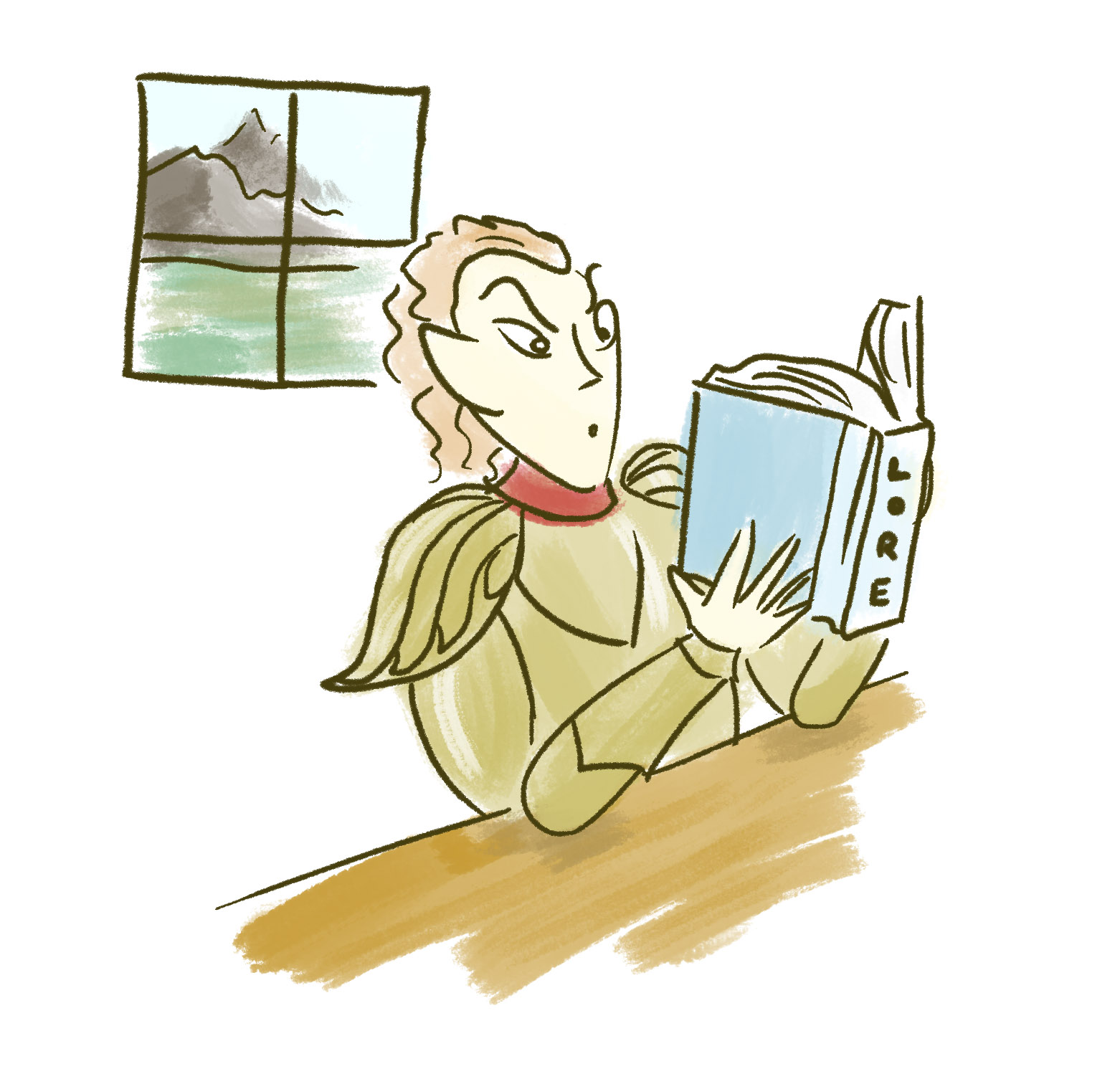 Continued from this Goodreads review

I dislike infodumps. I think they’re unnecessary by definition and cruel to readers, a product using successful authors’ bad habits to justify continued transgressions to storytelling. They’re fun to write and feel like homework to read. (I’d like to point anyone reading this to Goodreads’ own J.G. Keely’s wonderful blog posts on this subject, starting with part one). Which makes the attention I’m paying to this book incredibly hypocritical! Rhetorical questions bounce around my head: Do infodumps work differently in video games than literature? Is a “quantity” approach okay when “quality” (by other media’s standards) tend to not work in a video game format? Am I desperately trying to find an artsy excuse for why I played hundreds of hours of some fantasy games? Am I holding video game writing to too high of standards? Too low?

Video games are too big a part of my life for me to not care about them (see the length of this review) and want to see them eke out of their awkward “PLEASE RESPECT ME” phase. Video games are already good at a lot of things, but good writing is unfortunately underrepresented in the medium. There’s more to a video game than its writing and worldbuilding—there’s the gameplay, the design, the controls, the music, the voice acting, atmosphere, on and on. There are wonderful games with horrible writing, and wonderful games with no plot whatsoever. However, Bethesda published a physical book of stories, which allows me to look at it as capital-L Literature, and I’m not going to brush it aside with “iss jussa vidyagame,” yet I have to acknowledge I wouldn’t be reading or writing this if I hadn’t sunk a couple hundred hours into Skyrim (and a few hundred more into the prequels). There is my conundrum.

There are some legitimately interesting things going on in these stories. This isn’t a book of sponsored fan-fiction (although The Elder Scrolls isn’t exempt), more like a pretty repackaging of something that was already a part of the games. You can find everything in this physical book on the game’s bookshelves, in chests, bookshops, wherever. In some cases the (in-universe) authors of these books are NPCs you can speak and interact with. This adds an interesting layer to the stories. Not only do these stories have to be entertaining to sit down and actually read, but they also have to convincingly look like a product of the world they’re describing.

(In a perverse way, having hundreds of history books you ignore is one of the things that makes the game’s world resemble ours. That might make actually reading them redundant! And maybe they are, but I don’t think the individual stories are worth ignoring just because of the framework they’re presented in, they’re interesting and entertaining on their own terms.)

The in-game books also document the differences in storytelling through literature and video games (granted you’ve played enough Skyrim to make the comparison). With the same exact fictional backdrop, the differences and strengths to each medium become more clear. Literature allows more reflection, small character moments, deeper characters (in general), and carefully constructed plots. (For one example, the written stories are much more specific describing the effects of violence. Skyrim’s a violent game, but for the most part it’s only people groaning and their red bar going lower. In the stories people actually get injured and have scars and are capable of dying in ways that have actual weight. The shift is stark.) Video games don’t do well with the mundane and the small, and have much more to juggle than literature does. Maintaining a sense of interactivity is essential—the feeling that you’re actually playing a video game, not pressing buttons to get to the next cutscene. This comes with a price—developers can only allow so much to happen and still be able to tell the general story they want to tell. You can only program so many specifics. Towns in Skyrim are bustling when you first enter them, only to enter complete Truman Show-esque routine in minutes’ time. In literature, everyone always has a pressing concern and changing inside lives, because you only need to see them when they enter the story at the author’s control. In an open-world video game, they’re always there. You can watch them wake up, follow them around, and follow them back to their house. They’re human only for as long as the programmers can make them, but they’re machines every other time out of necessity—yet being able to see someone’s routine like this also humanizes them and let’s you know them in a way literature couldn’t. It’s a tradeoff, it shows its seams, and it’s different than what literature can provide, but it’s not empty.

[This tradeoff isn’t a set-in-stone rule, and I’ll point to one of my favorite video games, Majora’s Mask, for that. The mechanic of playing the same three days repeatedly allows NPCs to always have observable lives and personal agendas and nuances, yet completely retains player interaction and exploration. You even get to explore and interact with the world as different people and races through the masks. It’s a beautiful, melancholy game, and it quickly makes you realize you can’t help everyone. In my opinion it’s the pinnacle of video game writing—it’s not just good writing that happens to be in a video game, it’s good because of how it meshes with the gameplay itself. The fact that this was achieved in 2000 on barebones Nintendo 64 technology is depressing.]

I think infodumps and exposition, while still not the best way to tell a story, work better in video games than they do in literature, because there’s an optionality in video games not present anywhere else. In a big fat fantasy tome, whenever an author feels like subjecting readers to troop formations or eighteen generations of royal lineage, the reader has nowhere to go. This infodumping might be pleasant if the reader is already engrossed and invested with the world, but it’s grueling for the uninitiated who’s still looking for a reason why the world is important and worth expounding on in the first place. These jaded readers’ only options are to suffer through the dump or to skip ahead. Skipping pages is problematic because of the guilt that’s tied with it, and how you can’t say you experienced the whole book to judge it accurately.

Video games like Skyrim don’t have this problem. You can play a couple hundred hours of the game without touching half of the plotlines and ignoring all the writing the game has available (hell, half of these in-game books might not even spawn for you), but no one could tell you you didn’t play Skyrim. If you desire a streamlined plot, you can go ahead and zoom through the quests. If you’re already invested and enjoy sinking into the details, then you’re who the in-game books are for. These in-game books may be the embodiment of the fat that should be cut from a novel, but in an open-world video game setting, it harms no one. It’s a small beauty to video games that no other media has a comparison to (unless Choose Your Own Adventure novels take off), and it’s one the Elder Scrolls series takes full advantage of.

I don’t think video games should try to be movies or books. A narrator in a book (or the camera in a movie) has the role of guiding the audience through a story, showing them everything the creators want them to see, everything they should know at the exact time the creators want. In video games (good video games) this control is relinquished. It’s hard having to make stories that are good enough to work on their own with no filter. Would your favorite book or movie hold up if you experienced it in real-time as a person standing in the room, eavesdropping on the action? Would all the timing, style, and emotion be preserved? It’s not that video games are incapable of being good (in a writerly way), it’s just that they need their own way to be good. A novel that tried to have as much lore and worldbuilding as The Elder Scrolls would fail, without any of the elements of choice and exploration that the game uses to get people attached to its world and stories.

When a game is built around its freedom of choice and interaction then forces the player to play through a controlled “artistic” plot event, the fans rightly explode (see the backlash to Mass Effect 3’s ending. An entire franchise beloved for its elaborate plot your actions and decisions have actual effects on, concluded with unfitting 2001-esque space mysticism that the choices you made over three games had zero effect on.) Everyone agrees about the pleasant-but-mediocre lowest-common-denominator nature of plots in blockbuster movies, but for some reason this isn’t applied to AAA video games, despite being just as big-budgeted, corporate, calculated and crowd-pleasing as your average blockbuster. The faster people call out on games like this the more pressured they’ll be to improve and find something more unique. Don’t settle with endings to games like Bioshock Infinite that you’d call out as a lame eye-rolling twist if it were in a movie. At least justice was served for Mass Effect 3.

Of course in a perfect world I’d want video games to have smart original plots and not have to make excuses for themselves, but when you have big-budget AAA games and little room for experimentation, I’d rather they aim for something big and open and unique to their format than try to emulate mediocre blockbusters.

Skyrim may have pleasant but lackluster writing (“shut up, Paarthurnax”), but in the end, I think it’s the closest at showing what video games are going to be really good at doing in the future.

PS: Obsessing over nerdy details can have actual positive effects, and can show why learning history and mythology can be interesting and rewarding—I can speak from experience. Hot off Skyrim infatuation, I felt like really diving into the lore of the games until I stopped myself and thought—why don’t I read some real “lore”? I channeled this energy into reading Ovid’s Metamorphoses and several Icelandic sagas. Yep. Most of Metamorphoses went over my head, but Icelandic sagas are a blast. I still credit Skyrim for helping bud a fascination with ancient literature. IT CAN HAPPEN.